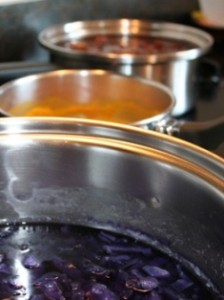 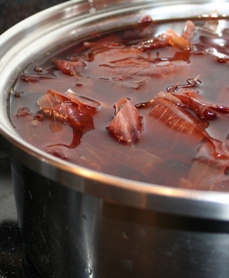 We added vinegar once the liquids were in mugs for dyeing on the counter, except for Chlorophyll.

We hard boil the eggs right in the onion skin and water. This is traditional for us, it makes a beautiful burnt sienna color – might be too close to brown for some. I strained the liquid into a mug for dipping other eggs… For instance, my favorite yellow is a golden yellow that’s formed from dipping in turmeric for a bit first and then in this onion skin liquid. so pretty.

The turmeric and water (1.5 tablespoons to 2 cups of water) is boiled first – it’s best used warm or even hot – it separates as the water gets cool.

The red cabbage made the most beautiful color of blue-purple water. but it barely colored the eggs in the end. i was disappointed. Next year, we might try to boil the eggs directly in this like with the onion skins but we won’t use vinegar in the boiling. it’s used in cooking with red cabbage so that the cabbage keeps its color and we want it to give up its color to the water. 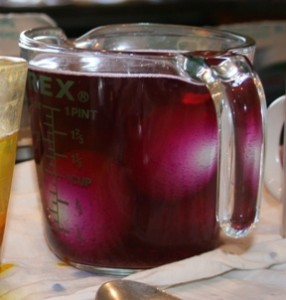 Beet juice made a pretty light pink. i used canned beet juice – drained the liquid from the canned beets into a mug. i warmed it up in the microwave. warming was an outright necessity. i might try something else for pink next year.

The chlorophyll was really interesting. makes a really pretty green – but you cannot add vinegar to it like to the others or it curdles (for lack of a better word). it may seem pretty that way, but the curdled, darker pieces never set and the dye comes off on anything it comes near. the dye without the vinegar comes off a little, but it was barely anything worth mentioning. we just poured it straight from the bottle and didn’t heat or anything. really easy, really pretty. and didn’t take long to get a great color.

The blueberry was a pain to make but made a really pretty blue. I used frozen blueberries, added some water and then smashed the blueberries with fork and forced what liquid i could through a fine mesh strainer. i should have warmed this up a bit to see if the color would take faster. Next year, i’ll try canned blueberries and just drain the liquid and use that and i’ll see how it goes. 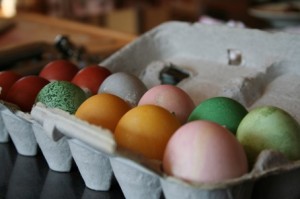 the turmeric straight made brighter yellow eggs – they were pretty too. there’s (a blurry) one in the easter basket below. 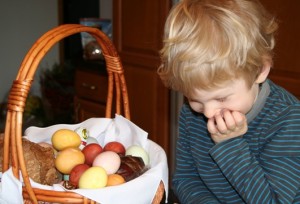