Though not officially planned for Earth Day, I’ve learned how to make yogurt with some good timing. Not only will it stop me from buying more plastic, the taste speaks for itself.

There are many methods for making yogurt:

The electric blanket.. The crock pot… The oven… Or some variation.

But that’s just too much for me. I couldn’t do it. I decided to go with the gadget. I will beg Alton Brown‘s forgiveness later (he, btw, goes the electric blanket route).

With the yogurt maker, you follow the manufacturer’s instructions – though it seems that most instructions are quite similar. For mine, I had to heat up the specified amount of milk to 180 degrees in a pot. Translated for the busy mom: a kid started screaming once I put it on the stove and I forgot about it briefly and caught the milk as it started boiling. Since I couldn’t find my thermometer to be sure what the temp was and it was bedtime, I took it off the stove to cool to the suggested 110 degrees, but by the time I got back to the milk, it was room temp or something like it. I kept moving forward thinking If this is that precise of a science, it will never work for me anyway.

There is a yogurt:milk ratio that you have to follow, so I did the math ahead of time. (when no one was screaming and it wasn’t bedtime. What was I thinking?) You add some of the milk to the room temp yogurt and then add it back to the pot and mix it all up. Pour into the adorable little jars – I opted for glass:

Then I put the dome on it, set the timer for 8 hours and went to sleep.

I overslept. And had to get the kids fed and out the door to school, so I have no idea how long it actually was by the time I made it back to my yogurt, but I do know that it was more than 8 hours and it was creamy and tasty and for the sake of experimenting I made yogurt cheese for lunch: 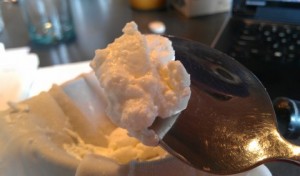 What are you doing for Earth Day?