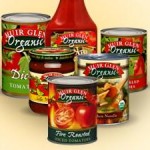 Great news if you are concerned about BPA in canned food: Muir Glen, maker of organic tomato products, is going to be switching to BPA-free cans as of their next tomato harvest. As far as I know, this is the first company to put tomatoes in BPA-free cans. Canned food is a major source of BPA exposure in humans, and until recently there have been very few options for food cans whose linings don’t contain BPA. Eden Organics is one notable exception; their beans come in BPA-free cans and are the only canned beans I’ll buy now (when I’m not trying to cook my own from dried; that’s another post). But in winter, when store-bought tomatoes don’t even deserve the name, it’s been hard not to just grab a can of tomatoes, especially when I really do like Muir Glen’s tomatoes (far better than Pomi, which I’ve been buying instead because they come in BPA-free aseptic packaging).

So I’m thrilled that, perhaps by next winter, we’ll have a good BPA-free option for tomatoes, too. I’m also thrilled that the FDA and EPA both recently announced they will be taking a look at the effects of BPA exposure (the FDA in food packaging, the EPA in the environment). About time!

(News from greenbiz.com via Safer Cans)